Preliminary Site Investigation of a 4.2 hectare former vineyard in support of proposed subdivision of the property into four countryside living sites.

A Preliminary Site Investigation with preliminary sampling was performed in support of an application for subdivision of the 4.2 hectare property.

In the course of the investigation a small area of soil contamination from an historical burn area was discovered. A hand-held x-ray refractometer (XRF) and delineation sampling was used to define the volume of soil contamination, which was determined to meet the requirements for a permitted activity under both the Auckland Unitary Plan (Operative in Part) and the National Environmental Standard for Contaminants in Soil (NES:CS).

The contaminated soil was then excavated and transported to a managed landfill for disposal without a requirement for a Detailed Site Investigation or preparation of a Remedial Action Plan, saving money and time.

Following validation sampling to confirm that the soil contamination had been removed, a Permitted Activity Summary Report was appended to the Preliminary Site Investigation Report and submitted with the consent application. Both the subdivision and soil removal were subsequently confirmed by Auckland Council to be permitted activities in accordance with the NES:CS.

“Having dealt with possible contamination issues before in a previous development,
the prospect of dealing with it all again was daunting.
Cato Bolam and Greg, their in-house contaminated land specialist,
were able to make the whole process simple and quick, including the clean-up.” 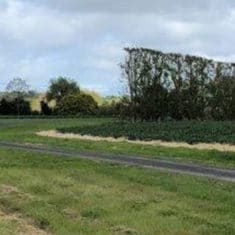